Founders Brewing Company is almost the opposite of what you’d expect from a Michigan city with a flag that looks like Pac-Man dying on the field of battle.

Yes this is their real flag

Grand Rapids’ greatest establishment managed to blow my tastebuds’ brains into tiny pieces with what my bartender/swami called the Sumatra Mountain Brown. I won’t go deep into particular flavor notes only vaguely communicable through text because whenever I read flavor descriptors that look like a list of chemicals on a shampoo bottle my eyes glaze over and a piece of my inner child dies. 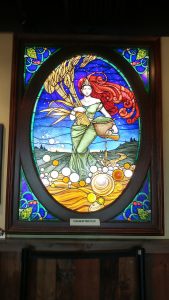 I don’t think I’ve ever had an Imperial Brown ale before, likely because it’s incredibly difficult to get the alcohol content that high without completely stomping all over the lighter flavors of a brown (as compared to a stout or porter, which have a darker roast and in general much more bitterness able to compete with and balance the high abv). However, this beer neither cauterized my throat with alcohol nor sledgehammered my tongue with hops/burnt malts. I got to relax and enjoy the flavor of the caramel malts and enjoy the coffee aftertaste, which likely helped make the entire thing less boozy. I know I’ve never seen the Sumatra Mountain Brown anywhere on the East Coast, so you might have to make the trek to Grand Rapids to enjoy.  They had a bunch of heavy experimental beers that were fun to try and oddball styles like an “Old Ale” that I’d never had before.

Altogether Grand Rapids seemed like a nice town. Apparently it was the first city in the U.S. to add fluoride to its drinking water – way back in 1945. Probably explains why Flint was encouraged to begin experimenting with more peculiar elements.

Limes don't exist in New Zealand. Even the bottled lime juice tastes like artificial lime flavoring. I ordered a margarita and they used lemon.

New Glarus: The most adorable brewery in Wisconsin

New Glarus: The most adorable brewery in Wisconsin

Maine is a magical place where all of...

Boston only has one IPA and they trick...